So, with Halloween nearly upon us, I find myself thinking about some of the great monsters of Horror cinema; from the all-destroying titans of Japanese Kaiju films to the mind-bending terror of Lovecraftian inspired shoggoths like in John Carpenter’s The Thing.

Still, I can’t help feeling that, with the wellspring of folklore and mythology we’ve built up around the world over the years, we have a lot of missed opportunities.

Now to be clear, I’m aware that there are some smaller horror movies (and non-horror movies) made about some these guys and I will try to touch on those that I’m familiar with where applicable, but that’s not what I’m talking about as a whole. I want to see these guys have big, successful, and legitimately AWESOME movies about the giant swaths of blood, death, devastation, and fear they tear through wherever they travel. Because let’s be honest, you kinda want to see a big budget, special effects gore-fest about… 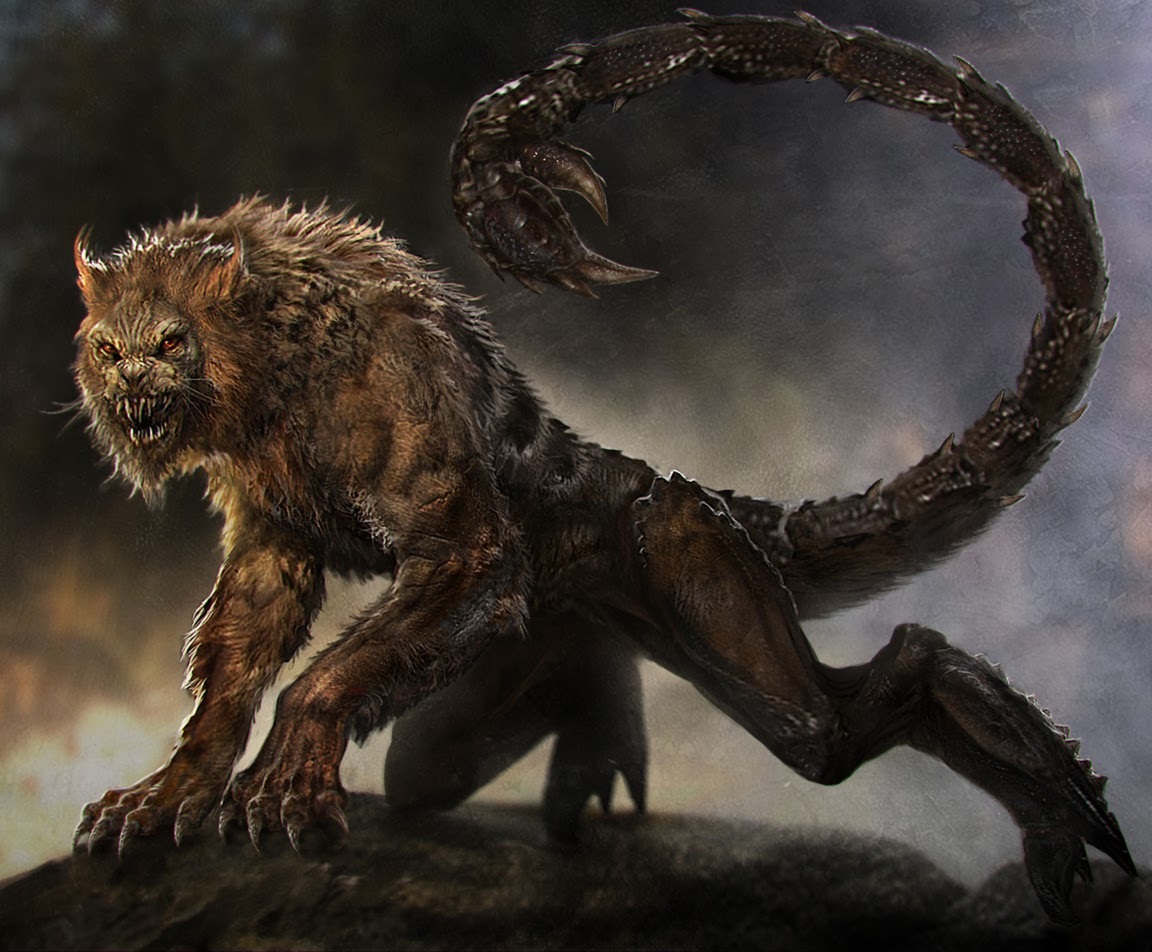 It isn’t often you see a mythological creature you could buy as an apex predator.
Source: Villians Wiki

With a human face, a lion’s body, a tail of poisonous thorns, and a mouthful of dagger-like teeth, the Manticore – derived from early Persian meaning ‘man-eater’ – is exactly what one might think of when you think of a creature built only for the hunt; combining some of the deadliest natural weapons with a cruel intellect that surpasses most people.

Now, I’m aware that the Manticore was featured in Percy Jackson and The Olympians (A.K.A. discount Greek mythology Harry Potter) but there, he was more of a brutish pet than the cunning predator that legend built him up to be.

My personal take on the Manticore would be more of a Cheshire Cat-like villain (imagine the smile on that beast) who, like most cats, enjoys playing with and tormenting his prey. You could have him set up his victims in an elaborate hunting ground full of puzzles and riddles ending in death traps (alluding to his possible inspiration from the Egyptian Sphinx) in a mythological take on the Saw franchise.

Failing that, you could just make a campy Horror Comedy and get Ninja Sex Party to do the theme song for you.

Probably among my favorite of North American folklore creatures, many native tribes of the northern U.S. and Canada speak of a violent spirit that would stalk and possess humans during the winter when the threat of starvation and famine loomed. Those possessed would become a Wendigo – an insatiable, cannibalistic monster overpowered by the need to feed on human flesh. Its endless state of starving pain leaves it with a gaunt, wiry frame that gives it a ghoulish appearance.

There have been attempts to make the Wendigo mainstream – most notably the Marvel comics interpretation and their appearance in the game Until Dawn. But I feel the best use of a creature such as this would be to place our heroes in an isolated area with no escape (easy to do given the Wendigo’s association to winter weather) and build tension among them by leaving them accusing each other of being a Wendigo while finding a way to fend of the spirit that continues to possess them one by one and flee back to civilization.

How do you come up with something that can be described as ‘demonic horse-headed velociraptor?’
Source: Weird NJ

Up to now, the creatures I’ve described have been from ancient mythology and folklore. But this one may have been the first MODERN folk monster I’ve ever heard of.

The Jersey Devil, named for its native home of Pine Barrens in southern New Jersey, is one of the most unsettling creatures I could imagine. In addition to its unearthly appearance looking like a bipedal goat-like demon with large wings, horns, and a forked tail, it’s also known for it’s blinding speed and a “blood-curdling scream” that I can only imagine sounds like the Witch King from Lord of the Rings.

Ever since I saw this guy in The Wolf Among Us, I’ve wanted a proper horror interpretation for this generation of horror fans. I’ve said in the past that the secret of good Horror is to capture a basic human insecurity or fear common with the modern zeitgeist and make a monster based around it. And I think Jersey captures a fear we don’t often see – the anxiety of parenthood.

See, the oldest tale of the Jersey Devil cites him as the thirteenth child of a woman named Deborah Leeds in 1735. She cursed him in her frustration after birthing so many children. When he was born, he butchered the midwife immediately before racing up the chimney and – according to some stories – began slaughtering the children in the area.

Rework that myth a bit so that the unborn child could sense his mother’s aggression towards him and, fearing for his life, made a Faustian bargain to gain the beastly strength to defend himself and take vengeance on all unloving parents by murdering their children and you have the makings of some great nightmares on screen.