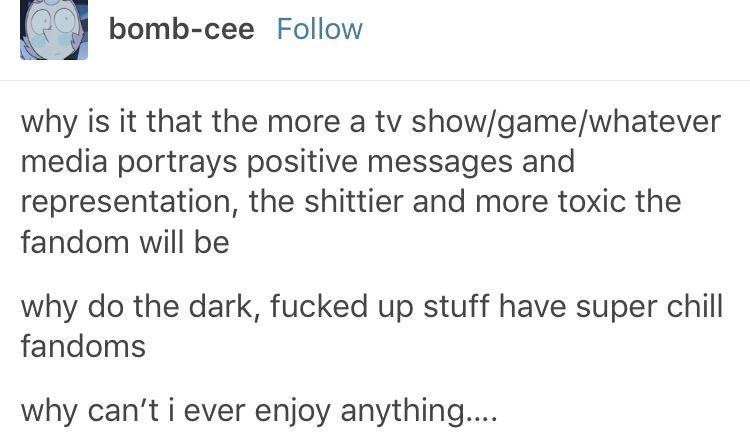 I can no longer stand idly by while everything I love is being destroyed!
Source: Amino

So, over the last month, I had to come to terms with a very sad truth – many of the things I love have terrible people that love them too.

It’s one of those facts that you know in your sub-conscious mind; the law of averages just ensures that at least a few undesirables make their way into the flock. But you really don’t think about it until a clutch of them jump out of the woodwork to make you and everyone else look bad.

Over the last month though, I’ve seen a rise in discussions on so-called ‘Toxic Fandoms’ and I won’t lie – it’s actually a little frustrating. So, I just want to give a quick step-by-step guide to how to deal with unsavory elements in the world of entertainment media fans in hopes of quelling the outrage and (admittedly) leveling some criticism on fandoms I consider myself a part of.

Step one: Make sure YOU aren’t part of the problem

I feel a lot of issues could be resolved if more people took a critical eye to themselves. It seems most people aren’t even aware that they might be helping to perpetuate a lot of the negative stereotypes around a fanbase.

Take my beloved Steven Universe for example. You’d think I show that is LITERALLY about love, acceptance and friendship would spawn and attract large scores of similar people – people who believe in respecting the diverse nature of the world and recognizing the value in differing visions and opinions. And for the most part, you would be right…

… Until you get to the kind of  s***lords that go on witch hunts for people they feel aren’t being PC enough and bullied a fan artist until she nearly attempted suicide.

Now, you may not be THAT terrible; in fact, I’m willing to bet most of you probably aren’t. But, are you the sort of person with a knee-jerk reaction perceived bigotry without questioning the context first? Well then, you may be perpetuating the stereotype without even knowing it.

Take some time to reflect on the ‘toxic’ aspects of your fandom, see where you and they are similar and take steps to put distance between the two of you. Not only will this help you identify the problem, but you will better yourself in the process.

Step two: Recognize them as the minority

Let’s state the obvious here because it seems surprisingly easy to forget; these a-holes that are making it hard to enjoy nice things are the exception, not the standard.

If these fandoms – massive as they are – really were full-to-bursting with these kinds of anti-social numbnuts, there would be absolute chaos. In fact, these fanbases likely wouldn’t get as big as they are if people thought there was a legitimate threat.

It’s important to remember that the majority of fans aren’t insufferable douchebags, but normal folks like you and me. Painting the whole fandom with a wide brush like that throws a lot of decent people under the bus that could help you regain the peace.

So remember, they are the minority – a vocal minority just large enough to screw things up for the rest of us, but a minority none the less.

Step three: Ask yourself, “How bad are they, really?”

The old saying goes that, “You need to choose your battles.” So ask yourself honestly, how many ‘toxic fandoms’ are ACTUALLY a problem and not just super annoying?

Are just creepy and weird folks that can be easily ignored like the Cuphead fan artists that draw Rule 34 incest slash art? Or are they legitimately socially disruptive like the Rick and Morty fans that made life miserable for underpaid McDonald’s employees?

If you’re going to start policing fandoms, you need to understand that there’s a line and not all ‘toxic fans’ cross it. Focus your energy on actual problems instead of minor grievances.

When you get down to it, fandom is a club. It’s a place where like-minded people can gather to converse with one another and network in a civil manner.

And like any club, occasionally, the bouncer needs to tell a few slimy-looking creeps that they aren’t on the list.

The biggest insult you can lay on a ‘toxic fan’ is the shame of knowing that the rest of the fandom has rejected you – that you so obviously missed the point of your fandom, that they refuse to let you associate them. That’s why I’ve been using the sarcastic air quotes whenever I use the term ‘toxic fandom’ or toxic fan.’ There are no ‘toxic fans.’ There are just people that miss the point of the story or art and make a mockery of real fans through their inexcusable behavior.

If you bully people for not acquiescing to your worldview, you aren’t a ‘toxic Steven Universe fan’ – you’re a narrow-minded jackass so concerned with the cosmetic aspects of bigotry that you fail to see it within yourself.

If you think it’s cool to get belligerent with a clerk because they don’t have what you want, you aren’t a ‘toxic Rick and Morty fan’ – you’re a self-important, entitled brat that thinks the world owes you something just for existing.

So if you see someone claiming to be a fan of something – even if it’s something you don’t particularly care for – acting out in a disgusting manner, don’t be afraid to call them out on their poor behavior. Don’t bully them into submission, but make it clear that they aren’t welcome here and don’t deserve to associate with you until they shape up and start acting like an adult. Remember, there are no ‘toxic fandoms’ – only terrible, ill-tempered, and reprehensible human beings that the world can do without.