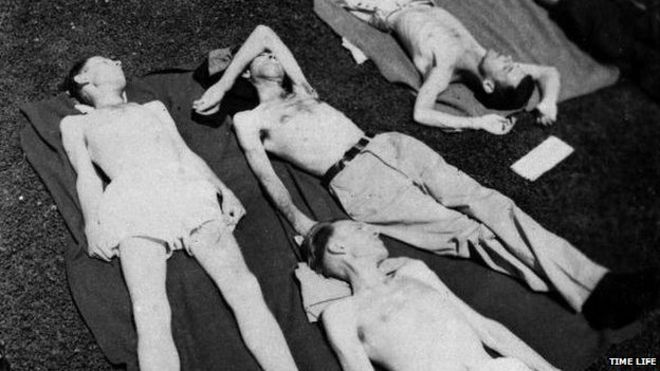 It’s not a good sign when you identify with the people in photos of a study on starvation.
Source: BBC News

I’ve made it no secret that I am deeply in favor of the notion body positivity. I believe that a person has the right to be happy in the flesh they’re in without feeling like they have to remold themselves to appease others. And if they DO remold themselves, it should be of their own volition – because they want to see themselves become their own ideal; not the ideal of others.

Unfortunately, there’s always been one aspect of body positivity that I’ve always failed at and struggled with – namely, applying it to myself.

You know the old saying by now; “You are your own worst critic.” And quite frankly, I’ve always been guilty of harshly judging myself; sometimes to the point of self-hate. I could talk at length about the various flaws I see in my personality, but this is about hating my body and I have plenty to talk about in that regard alone.

I hate how flat my butt looks in a mirror. I think that my pudgy, Scottish chin is disgusting. Seeing the thick, masculine carpet of hair on my arms and chest makes me feel unclean. I’ve always felt physically weak and pathetic compared to other people; especially when compared to my father – a former U.S. Army Sergeant and body building enthusiast with access to training and conditioning I could never hope to get and I doubt I could even live through.

So, last week, I lost that positivity and self-love. I caved in and started a strict calorie counting regiment.

I didn’t even make through Sunday before I remembered why I needed that positivity.

This diet was VERY tight. I was barely eating over 2,000 calories a day and burning more than TWICE that much through my day job and regular exercise which consists of a daily 3-mile (just under 5-kilometer) power walk through a heavily forested park. I knew that this was a stupid idea, but I stuck with it because I hated myself so much that I was going to see myself change or destroy myself in the process.

Combine this forced malnutrition with a sudden heat wave in the area, stress from work, a lack of a consistent sleep schedule and guilt at taking my frustrations at ALL OF THIS out on others, and it’s no surprise that my moment of realization at what I was doing to myself came to me in the form of a bout of sleep paralysis and vivid hallucinations involving nauseating fractal patterns, faces contorted in agony and (inexplicably) a leopard-faced man that I’m still trying to figure out whether he was supposed to be the demon Flauros or King from Tekken.

The most absurd thing about all of this though is that I should have known better. This is a similar scenario to what I went through back in middle school when I would skip lunch because of people taunting me. It left me pale, sickly, thinly drawn and so weak that I couldn’t even leave the house some days. I had forgotten that my self-hate had nearly killed me over 20 years ago and I almost let it try to do me in again.

I guess what I’m trying to say is that, in terms of health improvement goals, you really need to pay attention to your body instead of the criticisms of yourself and others. The numbers that your Fitbit churns out might give you some insight as to the whys and hows, but they can’t tell you what you ACTUALLY need. Push your body to new levels, but not to the point of self-destruction. Know your limits and steadily condition yourself over time.

Remember, it’s YOU and no one else that needs to want the change and change requires time. Clarity, patience, and effort; those are the keys to self-improvement and self-love.