Now, don’t let the title of this article mislead you. I have nothing against Dungeons & Dragons as a game. There’s a reason why D&D and its various spin-offs, knock-offs, and tributes have endured for so long among hardcore gamers. It really is that good and there’s just something satisfying about creating/playing your own unique story.

But, let’s be brutally honest. Variety is, as they say, the spice of life. A person needs new experiences to stay psychologically balanced and retain mental plasticity; learning new skills and interacting in and with fresh environments is key to our well being.

To put it in layman’s terms, you can only eat so many Oreo cookies before you start begging for a Nutter Butter.

To that end, here are three Pen-an-Paper RPGs that I’ve personally played that I would argue were just as much fun – if not more so – than D&D. 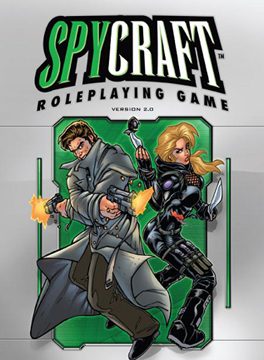 Given how many books and games came up when I searched for this, I’m amazed there haven’t been more copyright disputes.
Source: Wikipedia

You’d be surprised just how much a change of setting can be refreshing. With so many RPGs being Fantasy or Sci-Fi oriented, it’s nice to see one set in something that approximates the modern world.

Spycraft is not a huge departure from D&D in terms of rules; it still utilizes the d20 system and has similar rules regarding stats. So players making the transition won’t be too lost.

What’s nice is that the setting forces a more “cerebral” style of gameplay. Regardless of the Dungeon Master’s intent, it’s surprisingly easy (at least, in my experience) for a D&D campaign to devolve into hack-and-slash, kick-in-the-door, barbarism. In Spycraft, the setting of covert ops and tactical espionage tends to lead one into thinking with strategy in mind – stealthy infiltrations, high-stakes negotiations, black hat hacking and the like. And this is reflected in game with the use of Stress Damage during emotionally draining missions.

This isn’t to say that a good D&D game can’t force players into mental gymnastics or that a bad Spycraft game can’t be thick as manure and only half as useful, but it’s nice to have that guiding hand sometimes.

Yes, there are mentally enhanced octopuses in this game. Yes, you can play as one.
Source: DriveThruRPG.com

The promise of the future is both exciting and bleak. Leave it to the post-apocalyptic world of Eclipse Phase to catch both ends of that.

Yeah, the various colonized worlds are mostly toilet bowls of full slime and privacy is a thing of ancient history. But we now have Morphs – designer bodies built for specific tasks that people can download their consciousness into making us effectively immortal (as long as you have cash). What’s more, everyone has what amounts to a wireless internet connection in their heads that lets them use social media to run highly accurate background checks on everyone INCLUDING the authorities resulting in a system of law enforcement where everyone polices everyone. Sounds pretty badass!

The coolest thing about Eclipse Phase to me though was it’s rejection of the d20 system in favor of a percentile or d100 system. Basically, the massive bag of dice of varying shapes that most tabletop role players keep are simplified down to two 10-sided dice that can represent a value of one to one hundred. Every task has a percentage of failure/success based on difficulty that’s modified by your set of skills and experiences and your success is determined by whether or not you roll above or below that threshold. It’s much more simple to grasp for newcomers to the Pen-and-Paper RPG genre. 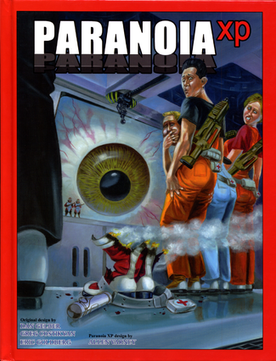 Who could have guessed that the dystopian world of 1984 could be so full of wacky hijinks?

This, again, comes down to that change of setting I mentioned. There aren’t too many RPGs out there that are INTENDED to be played for laughs. The goal of Paranoia isn’t to complete an epic quest or bring down a corrupt system; you’re just trying to force your friends to die in the most hilarious ways possible to ensure your own survival and win Big Broth – um, “Friend Computer’s” love and approval while trying not to get caught doing anything questionable.

Growing up, I remember so many people manipulating the rules of D&D with homebrewed monsters and items in the name of comedy (I distinctly remember one campaign including a “Belt of Masculine/Feminine-kind” that permanently swapped the gender of the wearer and then immediately loses its power to revert them back). It’s nice to see a game can be just as much goofy fun without the DM having to bend the rules backwards to do it.