I’m not sure why, but it seems that I’ve been losing interest in the triple-A gaming scene as I grow older.

Maybe I’m just bitter about how “games were better back then.” Perhaps I’m just legitimately more interested in what indie developers are doing. There’s the real chance that I’m just busy out of the house more often these days and I spend more time with cheap, free-to-play fare on my phone. Whatever the reason, I find myself drawn away from big budget releases in favor of indie games, classic re-releases, and mobile games these days.

And since I’ve been having a ball with taxes, family issues, and the like, let’s take a simpler approach this week and look at a few rapid-fire impressions from some games that have been holding my attention lately. 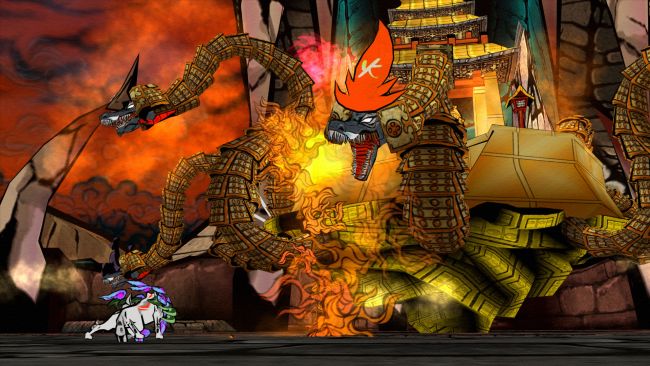 Let’s start with the classic re-releases, shall we?

I first played Ōkami on the Nintendo Wii and forwent the PlayStation 2 release thinking that the Wii motion controls would be better suited to a game centered around accurate brush movements (go ahead and get the giggles out now, a-holes; I’m sure it’s hilarious in hindsight), but the limited screen resolution made it very difficult to enjoy. After, a game about literally creating art should be, at the very least, pretty to look at.

The HD re-release addresses both the control and presentation issues I had in the past. There’s still a degree of challenge to accurate brush strokes, but none of that jittery nonsense from the motion controls. Plus, this is one of the few times I’d argue that an HD graphics overhaul was worth re-buying the game. Again, the one thing a game about art needs to get right is to at least look nice.

Other than that, it’s the exact same game as before; just as much fun and just as rich is Japanese folklore (so there’s this 3-part Kabuki theatre dance based on the folktale of Orochi on YouTube that you should totally watch…).

Did somebody say, “EXPLOSIONS?”
Source: Steam

Next, the smaller indie stuff…

The story is kinda cute; a giant corporation literally drops a freeway on your garage and you go vigilante to take it back. Reading the passive-aggressive tweet storms between you and the bad guys over who has the worse business practices is amusing if nothing else.

The game also features tons of customisability as you earn new weapons and upgrades for your ship. But, as I said, it’s a time waster; You’re going to want to have some free time to dedicate to grinding for cash and parts. That kind of gameplay is good for when you want to just not think about stuff, but I find I’m not exactly the kind of person that enjoys not thinking. And lastly, naturally, we come to the mobile game that I wish was more fun for me than it actually is.

Made of equal parts RPG and Idle Clicker, Blustone is pretty straightforward; you build a team, train them up, and tap on the screen ’till the bad guys go ‘boom.’

The problem is that, like most RPGs I’ve played, it starts out fast-paced and exciting, but slows down quickly to a slog of a level grinder. Plus, I found myself kinda distracted by the blatantly cutesy fanservice (how many bunny girls do you need, game?).

That said, there was ONE character that got a laugh out of me; an ice skater named Yuri (Get it?… Her name is Yuri… and you can say that she’s “on ice.”).