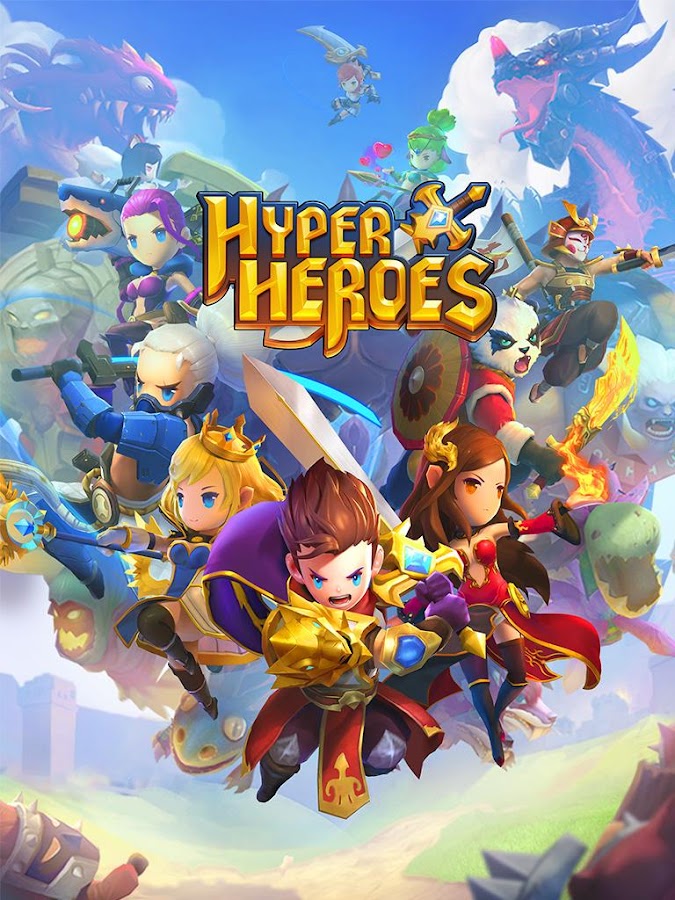 I feel like I’ve been doing a lot of more introspective philosophical pieces here lately. And while it’s good to do some soul searching every now and again, I’m sure you need a break from that as much as I do. So let’s get back to a topic I don’t touch as often as I used to; video games.

When I last reviewed a mobile game, I made it clear that I wasn’t sold on mobile games as a whole but remained hopeful that one could change my mood. I still feel that way, but I think that Hyper Heroes may have helped me to single out my issues with the mobile market. But first, let’s talk about the game.

Hyper Heroes markets itself as a, “marble-like RPG,” and that description seems to fit quite well. You select a team of up to four heroes and do battle with your standard high fantasy monsters by click-and-dragging to literally throw them at the baddies until they drop.

It’s marginally more complex than that description makes it seem. Obviously, there’s the RPG trope of level grinding (more on that later), physics-based tactics requiring you plot your angle of attack and memorize how far each hero can travel, and probably the best mechanic in the game; the various attack styles of the heroes.

There are three styles; bounce, penetrate and stick. Bounce will ricochet off enemies making for complex strikes, penetrate can move through enemy lines while dealing damage to reach priority targets, and stick with stop dead on the first enemy struck for precise setups – especially useful for tank characters to draw fire away from frail heroes.

There’s also a promotion system where, as heroes collect required gear, they can be promoted and gain up to four skills; a ‘Unique’ skill that can be activated after building up a rage meter, a ‘Combo’ skill that activated when another hero crosses over them in battle, a ‘Finish’ skill that triggers at the end of their turn, and a ‘Passive’ skill that grants general buffs consistently.

So, a lot of interesting stuff to work with. But, alas, there are some things in design that just irk me and that I can’t shake off whenever I notice them. And I think they may be a the root of why I haven’t embraced mobile gaming completely yet.

For example, it feels VERY cheaply made. I know that it’s a free-to-play game and I shouldn’t expect much from it, but I expect a level of quality even from budget titles. If you can’t afford to do something right, you find workarounds – not half-assed solutions. Case in point; the voice acting SUCKS. The actors are totally phoning it in for a paycheck and it’s painfully clear that most of them just aren’t comfortable speaking English. Those misdirected, disinterested squeals are an assault on my ears and my own enthusiasm – how can I care about the game if they don’t?

Secondly, the writing is distracting. It felt like the crew helming this project knew they couldn’t fit an epic story into a tiny mobile game, so they relied on humor… humor that tries insultingly hard to get me to laugh and fails miserably. the cringe-worthy comedy ranges from dated references (Seriously, Pyro Monk? A reference to Nelly’s “Hot In Herre” 15 years after the single dropped?), pervy non-jokes (Why is the cute deer-centaur druid asking me not to look at her tail?), and just generally bad writing decisions (I’m sure none of my fellow feminists will be bothered by the sexy female fire mage being called Flame Dame).

And finally, we have game mechanics designed to drain time and money. Remember when I said I’d discuss the level grinding? Well, the grind is so slow when simply battling monsters that you have to rely almost exclusively on EXP potions that you can either collect or – more unfairly – buy with real world cash. Now, I’m no stranger to in-game purchases, but they’re meant to sell convenience; not power. When I need to stock my kitchen with EXP potions and fill my wardrobe with rare gear just to have a fair shake in the PvP arena, there’s a balance problem.

The only alternative is to play every day to get the cumulative daily sign-in bonuses and I’ve only just started to learn how much I hate a game that tells me that I HAVE to play it. Once the game puts me on a schedule, it doesn’t feel like a game anymore; it feels like a second job. And unlike a real job, I don’t get sick days. Instead, I get punished by losing by benefits and have to start building them up again from square one… Oh, and I don’t get paid for coming in either.

Still, there is some merit to Hyper Heroes. There is a germ of a good idea in here and I’m hopeful that a more competent studio attempts something similar in the future. If you can get pass the uglier parts of the game, there’s a well-made puzzle-RPG with cute character designs and unique gameplay that can hold your interest.