This is the day that the internet rises up to show their love of one of William Shakespeare’s most beloved historical dramas, Julius Caesar. I’m no different; I am a Bardolator – a term used to describe lovers of Shakespeare that was once used as a pejorative (the word is meant to be a portmanteau of ‘Bard’ and ‘Idolator’) but, like most titles in art, was re-appropriated and embraced by the very people it was meant to demean.

However, I feel that focusing on only Julius Caesar does a huge disservice to The Bard. I’m far more interested in how his works continue to influence us and our media. We continue to retell these stories with different perspectives, characters, and contexts to such an extent that we now question what he actually meant to tell us half the time.

So today, to celebrate the Ides of March, I’ll be sharing some of my favorite films and books that bare the tinge of the western world’s most celebrated playwright as I encourage you to seek them out and experience them the way I did.

Japan – a country that has been historically cut off from the western world and only taking influences in very small, heavily modified doses – has had a difficult time importing The Bard. In fact, the earliest attempts played the drama of Shakespeare off as farcical comedy.

First, he chose a more familiar art form to translate The Bard into. Instead of western theatre, Kurosawa draws his visual style from Japanese Noh theatre. The expressions, makeup, and actions of the cast are meant to resemble Noh actors and masks; a medium that takes full advantage of the talents of our leading actor, the incomparable Toshiro Mifune.

Second, parts of western mythology that would be foreign to Japanese viewers were replaced with similar tales from Shinto folklore. This is most noticeable in the removal of The Weird Sisters, inspired by Greek tales of The Three Fates, and grafting in their place an Onibaba – a demon hag made a legend in the tale Kurozuka (lit. “The Black Mounds”) where she tempted two monks to their deaths whilst singing of the pathetic fates of mortals.

Lastly, Kurosawa changes the message to reflect more Buddist ideals rather than western Christian ones. In the British world, there is a cyclical system of rule where chosen monarch replaces chosen monarch. Evil comes when a wicked ruler takes power and can only be undone by a good ruler – “The king is dead; Long live the king.” In Throne of Blood, it is the desire for that power that’s evil and, without spoiling the movie, ultimately spells the final fates of the cast.

Even if you struggle to appreciate the different cultural lens, this is still worth watching just to see some of the greatest film talents of Japan who have shaped the cinematic world as a whole.

Rozencrantz and Guildenstern Are Dead

While it’s easy to play the entire show off as comedy, I feel a lot is lost in doing that. This is, in fact, a prime example of a style of performance known as “The Theatre of The Absurd,” a style of fiction that has its cast delve into existentialist thought only to find almost everything absurd – that is to say, “meaningless.” If you remember my pontification of the works of Albert Camus, you’re already familiar with the concept of Absurdist philosophy.

Rozencrantz and Guildenstern spend the bulk of the show questioning why they do what they’re doing and wind up with so many more questions than answers, they make a game out of them that would later inspire the show Whose Line Is It Anyway? The ultimate answer ends up being that they are actors merely playing their chosen roles both on the stage and in life and that they, and we by extension, must see the play to its conclusion; “The show must go on.”

This is a great introduction to The Theatre of The Absurd and I recommend you see it either on stage or on the screen. 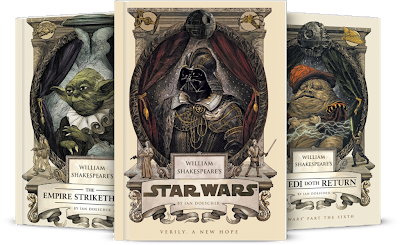 Yes, this is a thing… and it is amazing.
Source: writingwithaesop.blogspot.com

Shifting from film to literature, did you know the same publishing company that distributed Pride and Prejudice and Zombies also brought us the Star Wars films redone in the style of William Shakespeare?

Author Ian Doescher does an amazing job in recreating The Bard’s style; not only is every episode recreated in iambic pentameter with all of the requite thee’s and thou’s, but he also uses some of Shakespeare’s notable deviations such adding an extra unstressed beat – known as a “weak ending” – for meek characters like Shakespeare did for Hamlet or replacing the elegant verse for simpler prose for the lower born bounty hunter Boba Fett.

But what makes Doescher stand out is how he deviates from THOSE deviations. He does things that Shakespeare likely never would have conceived of. Such examples include dropping a beat of iambic pentameter for the character of Jar-Jar Binks (because he’s “one beat short of a verse,” get it?) and writing Yoda entirely in Haiku.

Not only is this series a fun way to introduce newbies to iambic pentameter, it’s amazing just how far even the most cringe-worthy moments and lines from the movies are elevated by being written in Shakespeare’s style.