… Not that I want to do a few bars of ‘That’s My Horse’ or anything, but still…
Source: Know Your Meme

So, I’ve been reanalyzing and reevaluating some long-neglected mementos of entertainment media from my childhood.

… which is the Double D way of saying, “I’ve been rewatching old cartoons from the 80’s and 90’s with a heavy focus on Ed, Edd, n Eddy.

But in all seriousness, every time I look back at these old shows, I’m always surprised how much the stories and characters imprinted on me as a child. Even more surprising though are WHICH characters contributed to the formation of my psyche.

Case in point, I was amazed at how relevant to my life the token strange foreign kid Rolf was and still is.

There was so much to love about this bizarre son of a shepherd from an undisclosed old world country (more on that later) and so much that I never realized influenced me as a child. But now that I’m older, I can truly appreciate how…

Rolf had an AMAZING work ethic 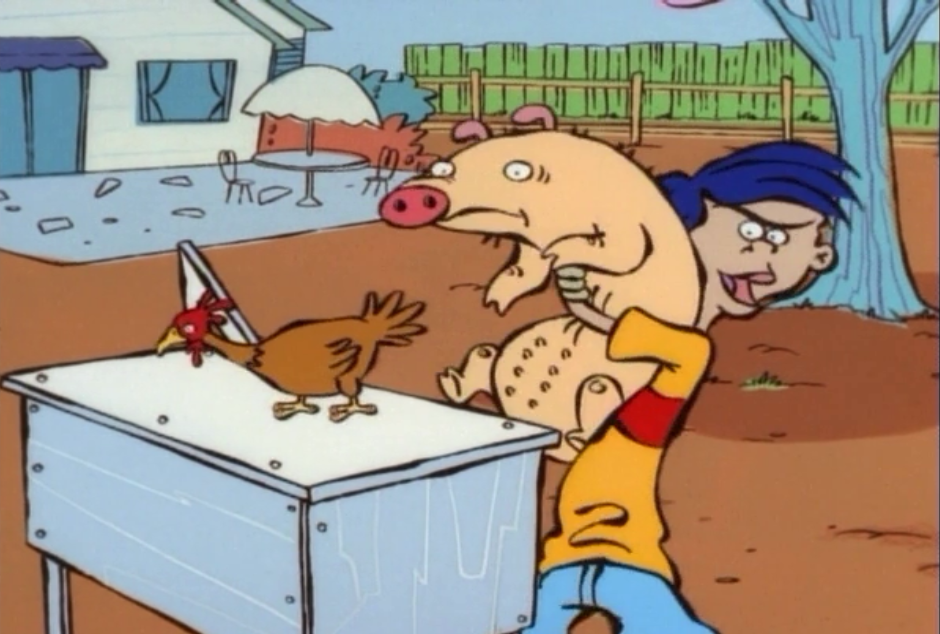 If a pig got into my chicken coop, I’d be a bit miffed too.
Source: book-o-scams.tumblr.com

One of the things Rolf and I have in common was that we both came from farming families that found their way into suburban settings. And like Rolf’s parents, mine were quick to impart the value of hard work.

You don’t often see kids like Rolf in media these days. It’s not to say that the modern office drone doesn’t labor vigorously in their own right, but it’s much easier to convey the idea of ‘hard work’ when you can see the sweat they put into it.

All of this taught him to respect the effort that went into producing something as well as the person providing it – a certain level of common decency that any retail worker will tell you is sadly absent today.

It ain’t easy to become a ‘man of the world.’
Source: Gfycat

As mentioned, Rolf is an immigrant child from a place only described as “The Old Country.” This is a big deal as series creator Danny Antonucci is a child of Italian immigrants and based Rolf’s actions and interactions on his life growing up (Side note: he kept Rolf’s nationality intentionally vague so as not to offend anyone).

Rolf struggles to integrate into his new home but still tries to regardless. To make the transition easier, he still maintains his own traditions and actively shares them with the other neighborhood kids who – despite being weirded out most of the time – still love him and enjoy having him around. In fact, they seem to enjoy his traditions most of the time.

Which brings me to…

Despite his many missteps in learning the culture of… whatever country the city of Peach Creek is in (I suspect Canada given the show’s production), Rolf is deeply respected among the neighborhood kids. That’s because, at the end of the day, he genuinely cares for them, helps them whenever he can, contributes to the neighborhood as a whole (remember, he leads the Boy Scout-esque Urban Rangers) and celebrates their achievements alongside them even if he doesn’t quite understand the significance.

Of course, like any healthy human being, Rolf can only take “the burden of hospitality” for so long without recompense. And when that happens…

Rolf had some of the best one-liners and insults EVER

Even when you don’t get it, it still hurts.
Source: pi-la.tumblr.com

One of the inspirations Danny Antonucci took from growing up with immigrant parents while making Rolf was the heavy use of proverb in their speech. Almost every line where he’s putting down an offending person or offering sage advice to another is steeped in metaphor. It then becomes a game of wit and intellect to decipher.

This results in one-liners and insults that not only cut deep but bewilder the minds of opponents; Which is what you want when you throw shade at someone. After all, the worst way you can follow up an insult is to be too taken aback to respond.

I would dare say that Rolf’s insult game is borderline Shakespearian. And before any of you try to tell me that Shakespeare would never write a line of dialog where someone tells another that, “your garden is overgrown and your cucumbers are soft,” (no translation needed, I hope) go back and read/watch The Taming of The Shrew and you may find out why Katherina was so insulted by Petruchio’s talk of tongues and tails. Or consider that Aaron the Moor from Titus Andronicus may have been the deliverer of the world’s first ‘Yo Mama’ joke.

Rolf basically taught me how to appreciate ‘the gentle stab’ when it comes to snarky put-downs.

In conclusion, the reason why I love Rolf is this: with his rich family tradition, well-meaning heart, and sharp tongue, he’s basically a kid-friendly version of Sophia Petrillo from The Golden Girls.