As of the previous night from when I’m writing this, I had the joy of seeing Deadpool at my local IMAX theater. I have to say that the film lived up to the hype. We fans can finally say that we got a true-to-character depiction of Deadpool outside of the comics that we can be proud of. They even managed to turn the upset of having their budget cut from under their feet at the last minute to their advantage.

But upon returning from the movie, I and my colleagues got to discussing why we love D. Pooly so much. What is it about this loud-mouthed cross between Ryan Reynolds and a shar-pei that makes us love him so?

Well, I can’t speak for everyone, but for me…

He Isn’t A Hero (Technically) It’s the thought that counts…
Source: The Deadpool Catalogue

As pointed out in my breakdown of the one-shot comic The Gaeneviad, the problem with self-proclaimed heroes is that they tend to come off as holier-than-thou douchebags hiding behind the veneer of righteousness and justice.

On the other hand, our dear Deadpool acts on the principals of moral relativism; i.e., the definitions of good and evil being subjective and based on one’s own cultural upbringing and environment that they occupy.

Wade may have a massive ego, but he has no delusions of being a hero despite what he occasionally insists. He simply acts as he feels he needs to in order to protect his own interests and those of the ones that he cares about/are paying him at the time.

Yes, this comic just made you feel bad for a foul-mouthed, murderous, sentient tumor.
Source: Cynic No More

Behind his snappy comebacks and gleeful destruction, Deadpool has a lot of emotional baggage to unpack. It’s easy to forget that this is a man who was dishonorably discharged from the military, forced into mercenary work to get by, was diagnosed with terminal cancer, horribly disfigured by the people that “cured” him, and then tortured so badly that he spent nights in his cell simply chanting the words, “Ow, my skin.”

Once you remember that, you start to realize that his manic personality is just a coping mechanism – a mask that he likely puts on to cover up his own pain. 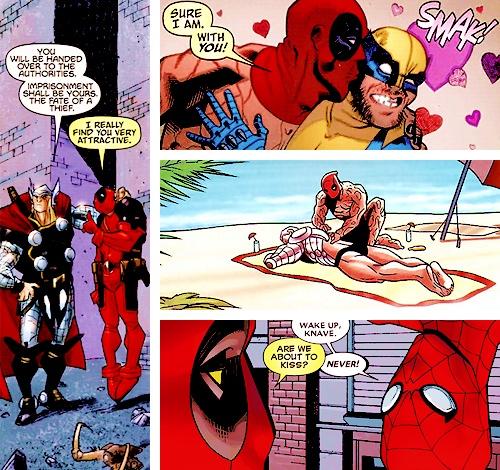 I sense the feeling isn’t mutual.
Source: The Odyessy

Despite looking like someone beat Rod Stewart with a baseball bat and held him down in battery acid, Deadpool has a shockingly healthy sex life with a long list of partners.

And when I say long list, I mean it’s suggested that he’s f***ed pretty much EVERYONE.

Deadpool is often characterized as being pansexual, meaning he is not limited by things like gender identity or biological sex when considering a love interest. He flirts with the likes of Thor, Spider-Man, and Wolverine, has been married to strange alien lifeforms, and has even had multiple flings with Death itself.

Basically, I like the idea of a man that looks like ten miles of bad road telling me that we’re all beautiful people.

He Knows The Importance of Engaging the Audience

One of Deadpool’s key features is his love of breaking the fourth wall – the act of directly addressing the audience and acknowledging the medium one occupies. While only a hand full of characters can do this right, something interesting happens when they do.

By becoming self-aware of their role in the entertainment industry, characters like Deadpool will often start playing to the audience. This forces the writers to do the same and results in a more engaging and entertaining story.