So, I don’t often follow up on articles so soon. But, since the thought of last week’s think-piece on Harley Quinn is still buzzing in my head and in light of how AMAZINGLY well received it was (seriously, it’s the second most shared post I’ve ever made. Thank you all), I felt the need to follow it up.

Honestly, if I made any error last week that I wish to take back, it’s this; what good is it to tell you how crappy a relationship is if I don’t give you some GOOD ones to compare it to?

So today, I’m going to delve through my backlog of comic book knowledge to share with you some of the most touching stories of love ever told through sequential art.

Alicia Masters and The Thing 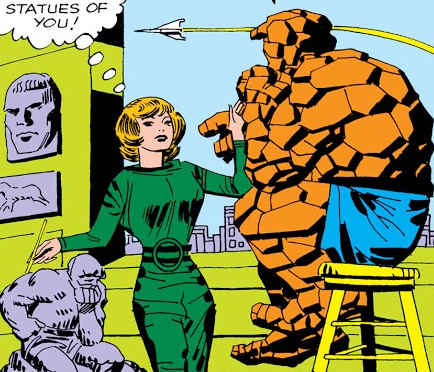 Heh heh, “The Thing-ker.” As an expert in puns – ten out of ten, Alicia.
Source: Marvel Database

There are few feelings I can think of worse that feeling like there’s no place for you in the world; that you’re just too different for anyone to love you. This was the way Ben Grimm – The Ever-Lovin’, Blue-Eyed Thing – felt after becoming a living man of stone.

But all was not lost. Even Ben found love in someone just as out of place as him; a blind sculptor named Alicia Masters.

She found beauty in his strength and the kindness that lies just under the rough, rocky surface; a beauty that she would often turn to for inspiration in her art. The two are nearly inseparable and will happily stand for the other at any cost.

It wouldn’t be me if I didn’t name at least one LGBT positive couple in an article about true love.

Now, technically this isn’t OUR Wolvie and Herc but rather the ones from Earth-12025 (damn, Marvel has a metric S***-ton of Earths). That said, it doesn’t diminish how awesome these two are together. Especially when you consider that these two hooked up in spite of anti-LGBT laws (Canada doesn’t recognize gay couples? MAN, this Earth is weird) and Zeus forbids any god other than him from cavorting with mortals (… hypocritical cock-rocket).

Now, as if having a boyfriend who is LITERALLY the God of Strength wasn’t awesome enough, this Wolvie – still using his birth name of James Howlett – is the Governor-General of Canada, is even tougher than our Wolverine (his skeleton is coated in Adamantine – the mythical metal Adamantium was named for – by Hercules as a gift), and the two are the greatest heroes on Earth in spite of the bigotry they face.

I have seriously never seen anything so awesomely metal and charmingly gay since my Man-O-War ‘Anthology’ album.

This is the couple I always think of first when talking about love stories in comics.

I think what’s so great about Arrow and Canary is the dynamic they share. Canary is never portrayed as a damsel in distress (she’s actually a savant in hand-to-hand combat), but Arrow isn’t forced into the dopey man role to compensate (he’s a billionaire industrialist and quite a brilliant inventor). They’re just a cute couple that has plenty of attitude between them that complement each other perfectly combined with a deep mutual love and respect.

Also, they totally open a flower shop together and call it “Sherwood Florist.” God, I love these two.

There’s no denying it at this point, comic book-based films are the top dog of the modern movie industry. As such, studios are looking to find ways to adapt any promising series or story arch that presents itself.

That said, there are a lot of properties and ideas that have yet to be considered that really should be (I dare argue that even the Green Lantern movie could have been improved with the presence of Dex-Starr, the Red Lantern cat).

So, to all those young film talents looking for ideas and fellow geeks looking to hound studios to work on stuff, here are some comics I’d like to see on the big screen (provided they don’t screw them up, of course).

Dear Marvel; if you’re looking for an actress for the part, my friend Jamie can fill the role. Source: Jamie Poison on Facebook

With Wonder Woman set to have her own film in a little over 2 years, it seems appropriate Marvel should be there to meet DC with their own golden girl.

Ms. Marvel is probably the one character that could match Wonder Woman for the title of ‘most important female figure in comics’ and has a wealth of backstory to work from. I would talk at length about it, but A) that would be an article in its own right and B) MovieBob beat me to it years ago and did it far better than I could.

There have been some rumblings of Ms. Marvel appearing in Avengers 2, but the stories are slim on information at this at this point and could all be speculation with little confirmed. Still, it would be a welcome addition to the Marvel Cinematic Universe.

Update: Apparently Ms. Marvel is scheduled to make an appearance in 2018. Good for you, Marvel.

You know what kind of story is sadly absent from movies? The film noir detective yarn. We saw attempts to use comics to revive the genre with some action tropes in the form of Sin City and The Spirit, but director/writer Frank Miller is to good story what Rob Liefeld is to attractive sequential art (that one was all the comic geeks out there).

Instead, I suggest trying again with Blacksad, an award-winning, Spanish produced, French detective comic set in 1950’s America that follows hard-boiled investigator John Blacksad as he investigates major crimes and deals with issues like political unrest and inter-racial violence.

The comic uses a technique that is not often seen today due to social stigmas; the use of anthropomorphic animal characters to help build personalities. For example, Blacksad’s character as a black cat is a clever twist on the ‘bad luck seems to follow me’ cliché.

We need some good, clever drama in film. And I think Blacksad could provide.

And now you know what the killer rabbit from Monty Python and the Holy Grail went on to do.
Source: Cover Browser

One of my favorite film genres and the one that’s least likely to be brought up in casual conversation among my associates is chanbara (literally, “sword fighting” in Japanese); a set of samurai action films that helped to inspire and shape American Westerns.

I mention this because Usagi Yojimbo (translation; “Rabbit Bodyguard”) is possibly the best chance to revive the genre.

Set in the Edo period of Japan, the story follows the adventures of the white rabbit ronin Miyamoto Usagi (a clever play-on-words of the famous swordsman Miyamoto Musashi) as he fights wars and slays mythical monsters while offering the sage wisdom of a man that seeks the best in himself after seeing the absolute worst that others can offer.

If the character sounds familiar to you, you were probably a huge fan of Teenage Mutant Ninja Turtles as a kid as the two made cameos in the other’s stories from time to time.

If you’re still unsure as to how high quality an Usagi Yojimbo film would be, I recommend checking out the short motion comic to sample the closest thing available at the moment.