We’re well into October and I’m feeling damn good; better then I have in years as a matter of fact. So let’s get spoopy together as Halloween approaches.

I’ve gone on record about how much I love horror movies and how important they are to society as a whole. But other than one brief look at famous folk creatures that deserve the screaming spotlight, I don’t think I’ve ever talked about specific monsters in horror cinema. That seems odd to me since the monster is so critical to the film. They embody all of our anxieties and fears that the protagonist must overcome and reveal a great deal about ourselves in the process.

So, this year, I’d like to let this weeks article serve as a love letter to three movie monsters that I feel haven’t gotten the props they deserve and – hopefully – show you why they mean so much to me as a horror fan and a cinemaphile.

Sanda and Gaira; The Gargantuas

Even when he’s been a total jerk to the people he loves, Sanda (the brown one) still looks after his brother Gaira in his hour of need.
Source: Musings of a Middle-Aged Geek

For those of you who, like me, have a weakness for Japanese monster films, War of the Gargantuas is right up your alley. It’s the tragic tale of two brothers torn apart by their own ideologies. It’s just that said brothers are also the movie’s monsters and the ideology is mutual co-existence with humanity versus predatory survivalism. See, Sanda the Brown Gargantua was raised in the care of humans and understands their capacity for good. His brother Gaira, on the other hand, spent most of his life out in the wilds and only sees them as another food source.

My primary interest in these two is less to do with the story however and more with the technical aspects of their design. For one, the costumes that the actors wear expose more of their faces than the average rubber suit monster. This allows them to be much more expressive than others of their ilk. Also, Sanda and Gaira are supposed to be much smaller than other giant monsters of the time – only about 30 meters tall (98.4 feet). By comparison, Godzilla has been between 50 and 150 meters tall (164 – 492.1 feet) depending on the era of the films he’s in. This means that the miniature sets that the actors stomp around had to be built much larger and, by extension, more detailed than other films around that time. It’s a minor change, but one that makes it stand out if you’re a connoisseur of the medium.

Sometimes, it’s less the monster itself and more what it does for the genre.

The Return of the Living Dead is a staple of the Zombie Apocolypse sub-genre that turns the rising tides of the undead into an allegory (emphasis on GORY) for the drug culture of the 80’s that sympathizes with the punks who are just looking for anything to make them forget the pain of life (remember, the multiple threats of nuclear war, environmental destruction, government corruption, and the AIDS crisis weighed heavy on everyone’s minds).

Likewise, much like how the punks turned to hard drugs to escape the pain of living, the zombies in The Return of the Living Dead are addicted to eating brains to escape the pain of death. And the gooey mess that fans have dubbed The Tarman is part of a legacy started by this plot point. In addition to an iconic design that seems to show him in a state of constant rot and decay, The Tarman is regarded as the first zombie to ever moan that hunger-induced rallying cry, “BRAINS.” As a result, everyone now associates cephalophagy (that’s fancy talk for brain eating) with shambling corpses. 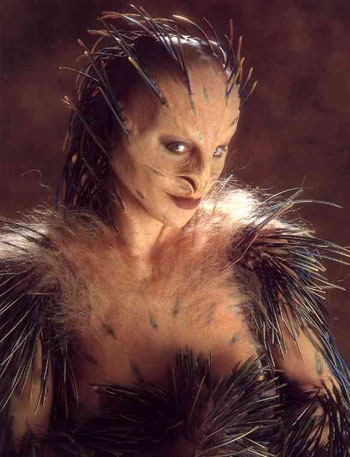 But let us not forget that these are horror movies and horror is all about symbolism. And few come with as much symbolic weight as Shuna Sassi from Clive Barker’s lesser-known film Nightbreed.

Throughout the film, Shuna is a VERY heavily sexualized character owing to her early life in an exotic brothel. While some may be quick to write this off as titillation for titillation’s sake, a quick look at her defining physical trait – the coat of poisonous quills that cover her body – makes it clear that she is both physically and emotionally in control of her sexuality. Nobody can lay a hand on her unless SHE wants them to; the ultimate empowerment fantasy for any sexually charged woman that can relate to the unwanted advances of another.

Shuna is also the physical embodiment of an inescapable truth of horror; people LIKE to be scared. There’s an appealing dangerous quality to the things that scare us that make us curious or even obsessed with them. It’s the main reason why we go through haunted houses, ride rollercoasters and – indeed – watch scary movies. By making someone so beautiful so intensely dangerous, Shuna Sassi captures this dualistic nature of the horror genre.