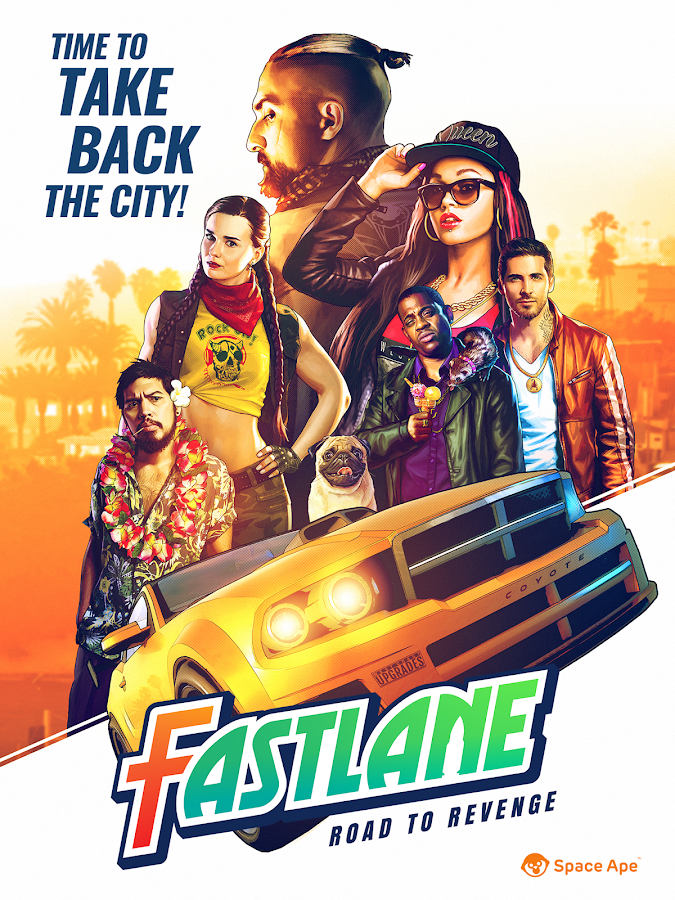 “THIS ISN’T GTA. NO SIR. NOTHING LIKE IT. ROCKSTAR GAMES? WHO’RE THEY?”
Source: Google Play

Uuuuugh… This year was even worse than the last. It’s been a year of terrible politics, rising ignorance, and shifty practices in all of the most crucial parts of our lives. I mean, I know it’s unrealistic to expect the world to form a Xanadu Bureaucracy of the Seraphim Incorruptible, but we could at least TRY to be reasonable and work towards a mutual benefit.

Basically, what I’m getting at is that I need to beat up on an easy target to make myself feel better before we get to 2018. So, please forgive me as I continue my futile search for a REALLY good mobile game.

Fastlane: Road To Revenge can be easily summed as, “what if GTA was also The Fast and The Furious and we make it a top-down Shoot’em Up?” And honestly only the last third of that sentence has any appeal to me and was the only factor in me installing it on my phone (other than the fact that I was without my PC for a month and needed some form of entertainment).

Now that’s not to say the premise is wholly bad, merely that it’s shallow. This seems to be a running theme among mobile games; story and character development are tertiary to simplistic gameplay to entice potential players and *gag* microtransactions to line the dev teams pockets. There’s IS a good story to be told here about gang violence and the criminal underground told through the aesthetic of automotive culture. The problem is that it’s a story that’s been done before and the fact that it gets sidelined makes me think that the folks at Space Ape Games are well aware of that and just wanted to get it out the door ASAP.

But what about that gameplay though? Well, it plays well enough. As stated, it’s a top-down Shoot’em Up in the same vein as the old school arcade shooters I grew up with like Galaga, 1941, and one of my personal favorites Dragon Spirit. You hop into your ride and race through your rival’s streets shooting up enemy cars for cash to improve your car and take back your city. On paper, it sounds quite exciting. But in practice…

Well, first off, your movement is limited; your car seems to be fused to the bottom third of the screen. this wouldn’t be a problem normally as you would want to as far back as possible to give yourself ample time to dodge incoming attacks. But the screen is so small and the action moves so fast near the end of a level that you can’t react in time and you’ll have to start over from the beginning.

Now, you’d think that this would be mitigated somewhat by the use of that nifty health bar in the upper left corner of the screen, right? NOPE. That’s only for ramming other cars. Everything else – barriers and missiles – are a one-hit kill. Oh sure, regular bullets don’t insta-kill you. But they only seem to show up when you’re already dodging traffic and do so much damage at that point that they might as well be fatal.

The hell of it is that none of this would be a problem if I could just control myself properly. You swipe your finger to steer yourself around, but you expect that to mean that your vehicle tracks your fingers position on the screen. Again, NO. I can’t tell you how many times I’ve swiped my finger between incoming missiles or stopped going to one side only to STILL grind against a wall and got screwed and killed by terrible tracking.

The only way to survive the onslaught is to upgrade your car and power-ups. Granted most of the stuff can be bought with regular in-game cash – stronger guns, power-ups, armor, ETC., but better vehicles and spreadshot guns which you NEED to make any progress are locked behind a paywall. Oh, you could level grind for DAYS to try to get the gems to pay for them or sit through the “optional” ads that pop up EVERY TIME YOU DIE hoping to get some, but let’s be honest with ourselves – you’re expected to buy them directly and pay for the privilege of in-game progression.

This is easily the most frustrating game I’ve ever played on mobile. It’s a shame too because it could have been a fun time waster if nothing else. But between the weak story, unfair difficulty curve, janky controls, and money-grubbing tactics, this is a game I’ll be happy to leave behind. Thank god this was a free download or I might have actually gotten upset.

One thought on “The Agent Reviews a Game – Fastlane: Road To Revenge”