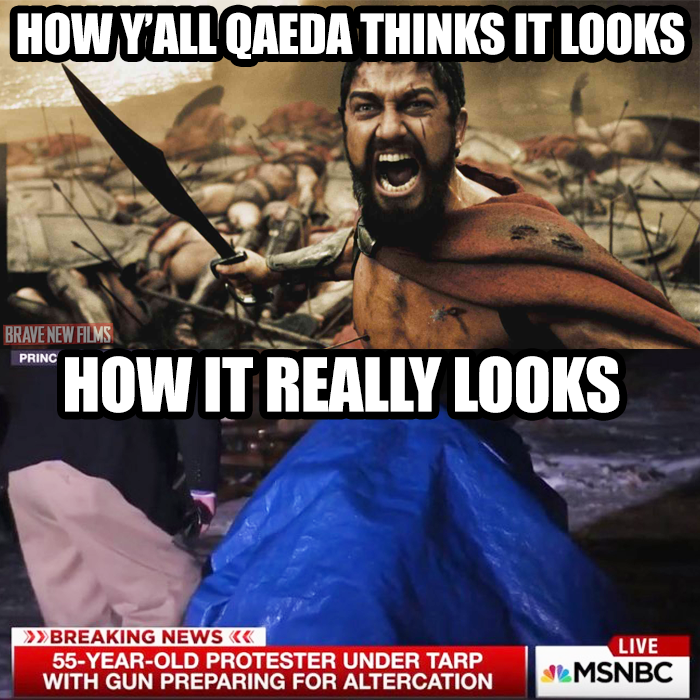 Heh, okay, that made my day.
Source: Brave New Films

I didn’t initially want to write about this because I was trying to avoid depressing topics. But, I realized that I would be neglecting my duties as a social commentator if I ignored this.

For those that don’t follow the news, an armed “militia” descended upon the Maltheur Wildlife Refuge in Burns, Oregon in protest of an arson sentence passed on two local ranchers. The backstory is INCREDIBLY complicated, but this Rolling Stone article sums it up nicely.

Long story short, everyone is P.O.’ed at the militiamen for the attacks and the federal government for their lack of response. So, we denizens of the internet took matters into our own hands by doing what we do best – troll the s*** out of them.

Frequenters to Tumblr and Twitter will have likely noticed hashtags like #Yallqueda or #VanillaISIS attached to stories about these hooligans. These were meant to poke fun at the militia for committing an act that is as effective to the situation as, to quote a well-known essay from my generation, “… trying to solve an algebra equation by chewing bubble gum.”

But here’s the catch; god knows these people deserve all the ridicule they get, but I can’t help but feel that the way we ridicule them diminishes the problems they’re causing. Remember, these are armed and hostile terrorists that invaded a protected territory. We need to take them seriously or else they’ll just keep acting up like the spoiled child that knows his parents are too lazy to punish him for misbehaving.

On the other hand, remembering that this is an act of terrorism, it’s important to let them know that we won’t flinch when they start flexing and posturing. And there are few better ways to get the point across that we aren’t afraid of them by insulting them to their faces. It’s very similar to the tactics we recently employed when we dedicated an entire day to trolling ISIS on Twitter; it doesn’t stop the problem, but it helps to let them know how ineffective their scare tactics are.

I call this “the Prince Vegeta Diplomacy.” Much like how Vegeta acts in Dragonball Z, we need to acknowledge our enemy as a problem that needs to be dealt with (preferably more swiftly and with less toying around than the prince, of course), but still treat them as more of a nuisance than a credible threat.

So, you know what, keep those hashtags flowing. They remind the enemy how pathetic they are and force the people that are sworn to protect us to acknowledge their existence and act. Words are the weapons of choice for the modern Digital Soldier and the best of us now how to keep them sharp, honed, and wield them with unmatched finesse.