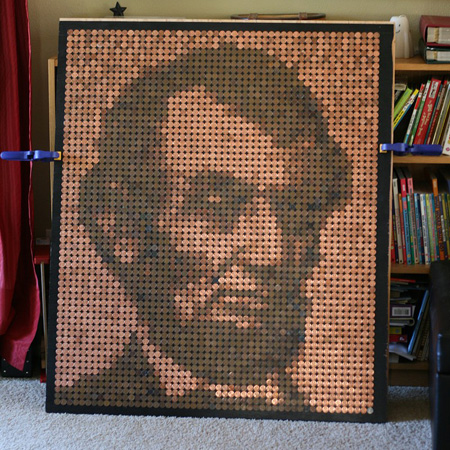 See this piece of up-cycled art? This is about as useful as pennies will ever be.
Source: design-laorosa.com

You want to know something we haven’t done here in a LONG time? Criticize my country’s odd politics and policies.

There are a number of odd choices that the U.S. has made that I could complain about, but I really don’t want to take on something too heavy as I haven’t done this in quite some time. Instead, let’s poke fun at how something as seemingly innocent as minting a coin can screw everything up.

Many people have been complaining about how worthless they think the penny is and they’re right. The penny has many problems attached to it and I, in my tried and true bulleted list style, intend to show you just a few of them.

They Cost More To Make Then They’re Worth

Originally, pennies were made from pure copper. However, when it became obvious that copper was far too costly to justify the low value of the penny, they started to reduce the amount of copper used – making it a shell over a core of zinc.

The cost penny production may be going down, but it’s still ludicrously high. In 2013 it cost 1.83 cents to make one penny. Yes, you have to pay nearly twice the value of a penny to make a penny.

Factoring in the number of pennies minted that year, this means we lost 55 million dollars in useless metal disks.

They Cost More To USE Then They’re Worth

Have you ever been stuck behind someone in line at the store as your soul starts bouncing off the walls screaming at them from inside your head space to just give up counting change and hand them an extra dollar?

According to one report at The Washington Post, people (customer and cashier alike) tend to add an average of two seconds to their transactions counting pennies. That may not sound like much, but not only does it add up over time – costing a single cashier at the average rate of pay 3.65 dollars a year in labor.

Now think about ALL of the cashiers in the country and realize how many dollars in man-hours are being wasted.

Remember how I said modern pennies are mostly zinc. To be exact, they’re 97 percent zinc. And zinc is not good for the environment.

One of the largest resources for zinc used in pennies in the Red Dog Mine in Alaska. The mining operation has been connected to several environmental disturbances including heavy metal contamination.

Yes, zinc is a toxic heavy metal and it gets released into the environment during the refinement process. Other nasty stuff that comes from refining zinc and copper includes lead and sulfur dioxide.

People Are Already Starting to Ban Them

There is already a huge movement to remove the penny from circulation. You may have noticed that vending machines, pay phones, and parking meters don’t use pennies because they aren’t worth the cost to transport and count. Well, it goes beyond that.

Several countries, including Australia, New Zealand, England, and Canada have already removed their respective one cent coins and the U.S. Army has followed suit by rounding all of the prices in stores on their foreign bases to the nearest five cents.

Even Mike’s Bikes, a bike shop with several chains in California, refuses to take pennies and rounds down all transactions to the nearest nickel. What’s more, NONE of the above examples reported a drop in sales, funds, or charitable donations.

So, in summary, pennies are a blight on both the economy and the environment, they waste time, money, and resources, and people are already starting to phase them out of existence. It’s time to stop letting these worthless little disks take up space in jars where they never go to use.

It’s time to kill the copper. Time to let go of Lincoln. Time to purge the penny.