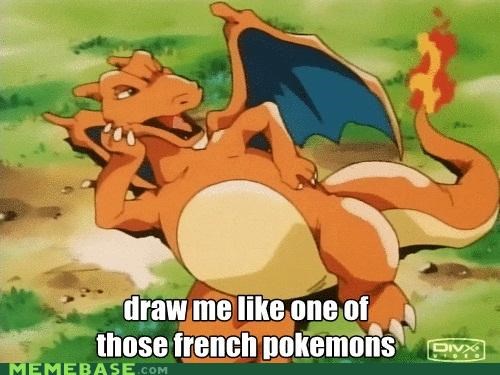 … And so it was done.
Source: Cheezburger.com

Lately, I’ve been playing a ton of Pokémon X when I’m not savagely working on projects for college. Honestly, I had fallen out with Pokémon after the second generation, but this new addition has successfully restored my enthusiasm in the series.

One of the fascinating themes of the new generation is its decision to leave the trappings of Japanese culture to explore that of northwestern Europe; specifically France. But how does it hold up? Is it an accurate depiction of French culture? Let’s see.

Take a few seconds to think of how much effort went into recreating half a country in a digital environment.
Source: Pokémon Database

One of the places where French influence is most prevalent in Pokémon X and Y is in the lay of the land. This is most clear when you overlay a map of our new setting, the Kalos region, over one of France.

The coastline of Northern France matches up almost perfectly with that of Kalos. What’s more, the mountains forming the eastern side of Kalos seems to be composed of the real life mountainous borders of Belgium, Germany, and Switzerland (indeed, you can find and speak with a character in-game that speaks only in German).

Continuing with the matchups on the map, the largest city in Kalos, Lumiose City, aligns perfectly with France’s capital Paris. Lumiose City’s main attraction is its brightly lit gym which bares an amazing resemblance to the Eiffel Tower. Even the name Lumiose City is a direct reference to Paris’ title as “the City of Light.”

Many people are quick to compare Geosenge Town to Stonehenge with its standing rocks, but this makes little sense as Stonehenge is in Wiltshire, England. It’s far more likely to be a reference to the Carnac Stones in Brittany, France. And yes, its location matches up on the Kalos map as well.

Chateaus, sidewalk cafés, and an Eiffel Tower. Yeah, I’m SO sure this is New York.
Source: GamesRadar

There are certain cultural elements that we all seem to connect to France naturally and it seems most of them can be found repeated throughout Kalos.

For example, France is one of the leading countries in the fashion industry. As such, one of the heavily touted features in Pokémon X and Y is the series of fashion boutiques and salons dotting Kalos that let you customize your appearance by purchasing new clothes and restyling your hair. Then you can get in costume to film ‘Trainer PR Videos’ to show off your style to other players online in a sort of digital fashion show.

Another recurring theme in Kalos is the appearance of hotels, cafés, and restaurants. The prevalence of these relates to France’s dominance in the tourism trade. After all, when you have huge numbers of people coming in and out of your country, you want them to have nice places to rest and entertain themselves.

Many terms and names in Pokémon X and Y are derived from French. For instance, one of the new gameplay features, Pokémon-amie, is a clear play on words of the French term ‘Mon Amie’ meaning ‘My friend.’ In the original Japanese, this feature was called Poké Parler; Parler being French for ‘To speak.’

Speaking of the original Japanese translation of the game, our new Pokémon expert proves quite interesting. Professor Sycamore was originally named Dr. Platane; platanes or plane trees being the French name given to sycamore trees.

Even some of the newly added Pokémon get in on the act. I could never hope to cover them all in one sitting, but we can cover a few like Trevenant who is a portmanteau of Trent, a fantasy race of tree-like creatures, and revenant, an undead ghost or zombie-like monster. The term revenant comes from the French revenir meaning ‘to return.’

Another wholly French Pokémon is Furfrou, who is essentially a poodle that can even be styled in-game. Its name is a pun on the term ‘frou-frou’ meant to describe something extremely fancy but has its origins as a french onomatopoeia for the sound of rustling fabric.

So why is it such a big deal that Pokémon X and Y draw so much from French culture? Because recognizing that is to see a person’s passion and fascination with an entire people and their way of life. Pokémon X and Y’s director Junichi Masuda is a huge fan of French culture and to see that come out in his game is to read a love letter to an entire country that seems to love his country in return.

It’s also a sign of increasing cultural awareness in these polarizing times. By showing a truthful and respectful depiction of another person’s culture, even in a world of fantasy, it shows a person’s understanding of them as well as a desire to share that understanding with others.

There is no way I could cover every connection to France in these games, so I encourage you to play the game and find them for yourself. You may be surprised at what gives you a sense of Déjà Vu.